The best interview about the crop circle.


This is the famous Jaime Maussan about Robella crop circle in his TV show:

The Guardian newspaper about the Robella circle

New Crop Circle in Robella, Italy Gives Formula for Energy?
Added by Stasia Bliss on July 1, 2013.
Sunday, June 30, 2013 a brand new crop circle appeared in Robella, Italy. It appears to be the third in a sequence of stars which began in June of 2010 – all in Northern Italy. The star in June 2010 was six-pointed, in June of 2011 a seven pointed star appeared, and now this eight pointed star – all of them seem to contain what looks like a binary code.
Near Asti, at the foot of Robella (just over 500 inhabitants) is located by Sunday morning a new and interesting crop circle. At first glance the dimensions seem relevant, and good workmanship. Very soon the community of the circles will certainly searching for the symbolic meaning of those shapes, and then we will give account – for example – of the meaning of those points within a triangle perimeter of the crop circle, the work of artists and certainly not pranksters or newbies (nor even aliens).
As you can see from the video, some have calculated out the code within the star yesterday to represent elements on the periodic chart: Potassium, Hydrogen, Deuterium and Sulfur. If this is correct, what are the implications of this code? We can look at the basic information known about these elements and then play detective – seeing what might come out of the simple act of looking.
Hydrogen is the ‘simplest and most abundant element in the universe.’ Hydrogen is the raw fuel stars burn in order to create energy and is an important part of the manifested liquid form of water. Deuterium is an isotope of hydrogen – also known as ‘heavy hydrogen’ and is abundant in the earth’s oceans. It is a key element in nuclear power – also thought to be essential in the creation of energy. In Science Daily May of 2009,an ultra-dense form of Deuterium was supposedly ‘the nuclear fuel of the future’, with a density rivaling the core of the sun. Apparently this ultra-dense deuterium would be an extremely efficient energy only producing byproducts of helium and hydrogen verses the dangerous radioactive counterparts of other nuclear creations. Deuterium is thought to be common in the giant planet of Jupiter.
Sulfur, the tenth most prevalent element in the universe, is believed to be produced within stars and is present within meteorites. On Earth sulfur is found near hot springs and volcanoes and Jupiter’s volcanic moon is thought to contain large amounts of sulfur due to it’s coloring. Sulfur is a common and important element used in mercurial alchemy and was given the symbol of a triangle resting on a cross. This element has been widely used to treat skin conditions such as psoriasis and eczema – all irritants.
Potassium in its stable state is formed in a supernova and apparently cannot be created on earth as it is too volatile and ‘reacts violently with water’ -which is interesting because it is present in nearly every food on the planet. Our nervous systems absolutely must have potassium in order to run. According to sources, potassium is the ’8th or 9th most common element by mass in our bodies and there are equal quantities of sulfur in the body as well as chloride. Only calcium and phosphorus are more abundant in the physical human vehicle.
So what is the meaning of all this? What was trying to be communicated through this latest crop circle? Perhaps it is all misinformed, or perhaps there is some sort of message regarding the creation of energy for this planet and the potentially ‘alchemical’ process involved. The eight points on the star seem to point to ‘infinity’ – maybe an ‘infinite’ source of energy? Whatever it means, it has become more and more clear over the years of appearing crop circles that some sort of information is being communicated through their deep symbolism. Our ability to interpret may only be as accurate as we are open to receive.
The words that seem to pop out when considering these four elements are: Abundant, Energy, Alchemical & Vital.
Whether you believe that crop circles, like the newest one in Robella, Italy, come from extraterrestrial life or not – something must be said for the intricate designs and obvious coded messages therein. Another who is more versed in elemental combining might be able to assess a deeper meaning of these four elements presenting themselves in binary code yesterday in Italy. To those who have eyes to see – let them see. What do you see?
Written by: Stasia Bliss
_________________
I do not compete with the world. I compete with my ignorance.

A great crop circle on june 30 2013 in Cavallo Grigio - Robella, 25 km from Asti, show a geometrical picture with many interpretation and ipothesys.
The tendency of observers to the scientific interpretation about the  free energy formula is almost unique.
We'll see what happens. 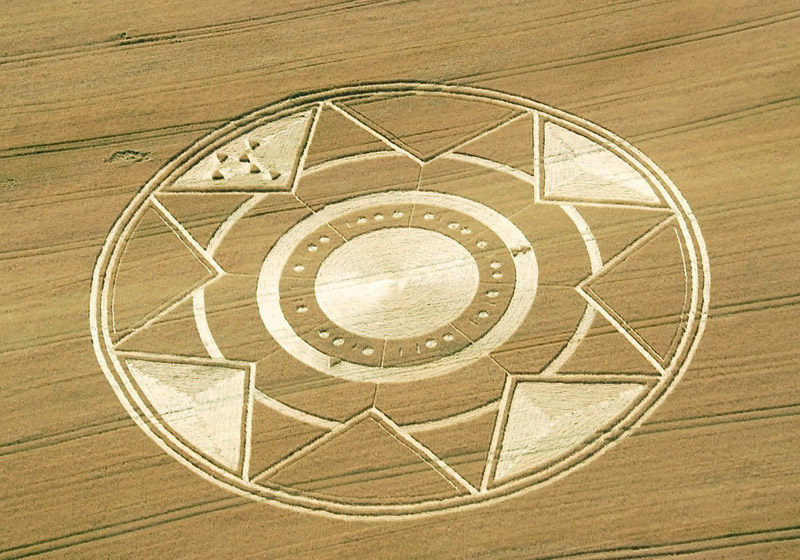 Re: A GREAT CROP CIRCLE IN ROBELLA - ASTI