THE CHART OF HUMAN BEHAVIOR

THE CHART OF HUMAN BEHAVIOR

EVERY intelligent being interacts with other intelligent beings
through his actions; these interactions are bound to cause
advantages or damage (in terms of material or nonmaterial gains
and losses) both for the agent and for its counterparts. An interesting
method for evaluating human behavior, based on the gains and losses
caused by these interactions, was proposed by Carlo Cipolla in his essay on
the basic laws of human stupidity.[1] The aim of the present interlude is to
verify whether conclusions of the same type might be applied not only to
humans of our planet but to all intelligent beings. The basic instrument is a

plot of the type shown in Figure. On the horizontal axis are gains (losses
are on the negative part of the axis) the actor causes to himself, while on
the vertical axis the gains and losses he causes to the individual with whom
he interacts. If the interactions are many, as happens when we want to
study the behavior of a given actor with respect to many others, the
average value of the gains and losses in the various interactions must be
reported.
If the representative point corresponding to the gains and losses caused
by the actions of a given person lies in the first quadrant (the interaction
gives advantage to both the actor and the others) that person is defined as
intelligent. If it lies in the second quadrant, that is, the action gives
advantages to the actor but advantages to the others, the actor is an unwary
person. If it lies in the fourth quadrant, that is, the actor obtains advantages
that cause disadvantages to others, we face what Cipolla calls a bandit. The
simplest case is that of the thief, whose action lies on the bisector of the
fourth quadrant (line OD, the gain he gets is equal to the loss of others)
only if the theft does not cause collateral damages.
Finally, those whose actions lie in the third quadrant, acting in such a
way to be a nuisance to themselves and others, are stupid.
Intelligent, unwary, bandit, and stupid are then the four possible types of
behavior of human beings toward their fellow humans. 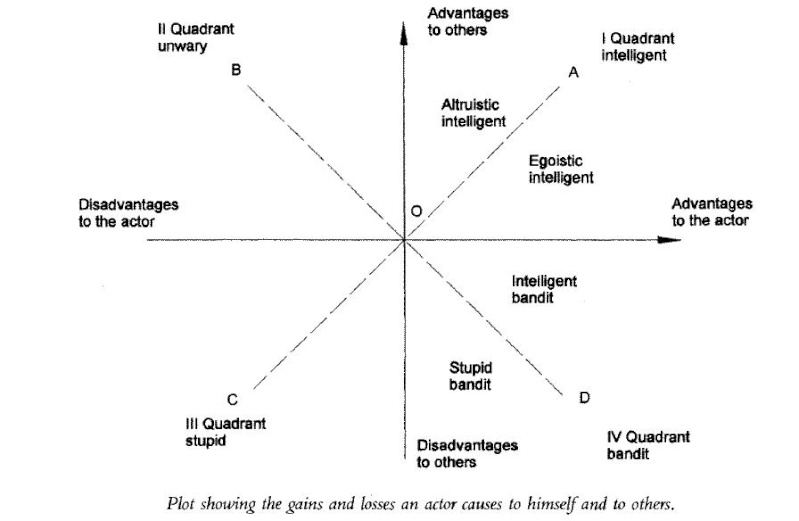